What's the most effective way to:

Here's a short demo of using tmuxinator to get a project running in several iterm2 tabs:

I use Guard for:

While I love running Guard with Zeus, Spring is the default in Rails 4.1, so I'll probably give that a try in the near future.

Tmuxinator is awesome for configuring the layout of several processes.

When I run the command

And then I see the following. This is way easier than opening up tabs in iTerm2 and running commands every time. 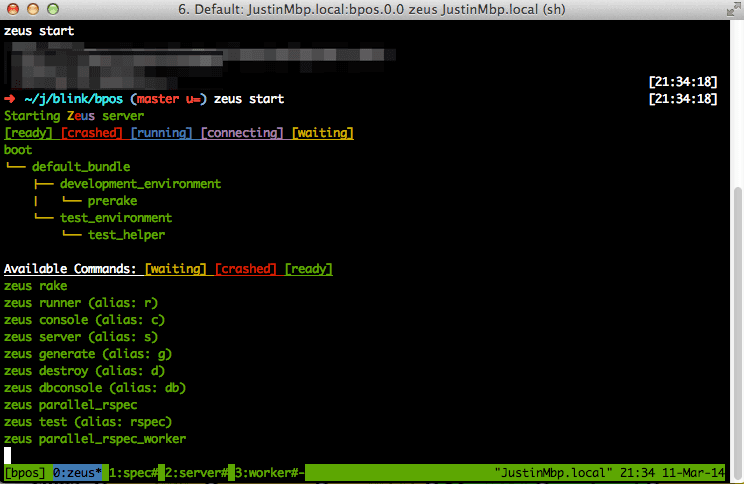 The main problem with this setup is that if you scroll a window backwards (using the tmux keyboard bindings), and you don't un-scroll, then the process pauses, such as the Rails server. That's super annoying. Often I'm running specs, and I want to scroll back to see a stack trace, but that prevents the continuation of the test run! Here's a short discussion of the issue.

iTerm2 with tmux to the Rescue!

iTerm2 has wonderful tmux integration. Here's the steps I take:

Once you have the setup done, this is how I start my iTerm2-tmuxinator session:

Here's how it will look:

If you want to kill the session, you can run this command:

However, that sometimes does not kill all the processes. I often use these two zsh scripts to ensure that everything is killed. It's super important to kill Zeus before running db migrations or gem updates.

Why Tmuxinator/tmux and not Foreman?

I use Foreman with Heroku and for running my rails server in production mode. However, I prefer having different tabs provide console output for each of the processes, rather than having all the console output blended together as Foreman does. I'm also not sure if Foreman integrates with Guard.