In the previous post we’ve built dummy app, which was universal, but there were no interactions with API, no state / dynamic data to deal with. To build complex apps we need a solid concept of application’s design. In React world such concept is Flux.

The list of stuff you need to be familiar with to feel comfortable while reading this post:

First of all, Flux is not a library or framework, it’s just pattern, so you should take care about the tools to implement this pattern. Facebook just gave few example apps and dispatcher thing. And you’re on your own with everything else.

Main issue with vanilla flux is that it’s not universal out of the box. Its stores are singletons, and singleton == problem on the server. If you’ll try to use it as is, store’s data will be leaking between requests. It means that visitor can get the content of the store of previous visitor. Nice surprise, eh!

There are a lot of flux implementations that came out to solve this issue. And I’ve spend pretty much time exploring them. Eventually I choose Flummox — isomorphic-in-mind Flux library with very neat API. I rewrote demo app for this series and, before start this post, I decided to try it on bigger app. So I rewrote my blog. Right after publishing it Flummox was deprecated in favour of Redux — library written by Dan Abramov.

So what’s so special about Redux?

Stores in vanilla flux are the owners of the state (basically it means that they are containers for their data). One flux application can have multiple stores (like models in MVC). In Redux there are no separated stores, but there is only one global store with data tree, which holds the state of whole application.

But how to handle changes of the state? For that Redux introduced reducers — state’s transformation logic, extracted from vanilla stores to stand-alone essence. Reducer is a pure function. It takes current state and action as arguments and returns new state. Here is the signature: 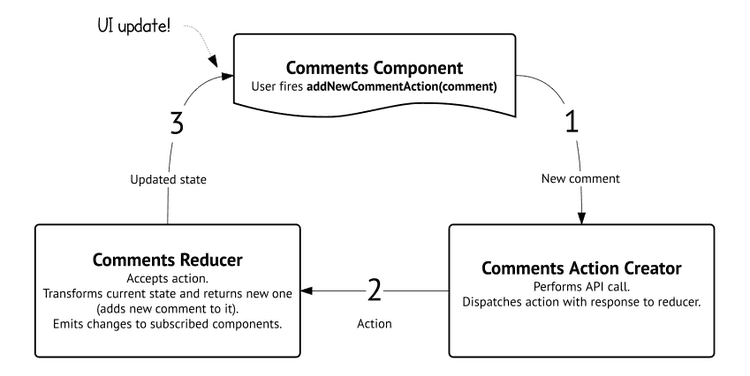 When user triggers action creator from component, it performs something (request to API for example) and dispatches action (as result) to reducer. Action is simple javascript object, usually looks like this:

At this point let’s get back to Isomorphic comments demo app. It already has JSON API and now we will build a client part.

Official Redux docs are still in progress, but you can check out significant part of them here.

This part is gonna be hard. To make it easier to follow, here is the link to github repo with application.

Before we begin, let’s take a look what’s going on inside bundle folder.

I propose to start not from point of initialization of Redux, but from user action in Component (new comment submission) — and then to follow the data flow. Hope this way it will be easier to get the concept.

First there was a form:

As you can see, when form is submitted, action creator is triggered. So next we’ll move to this action creator. But before that let’s define a few constants aka action types.

If there wasn’t API call, action creator would look like this:

But we should handle async stuff here:

You can explore apiCall helper here (it uses axios lib by Matt Zabriskie).

Now, when all actions were dispatched, we’re moving to comments reducer:

State updated! But how components will know that? To notify them about store updates, we should wrap them in apex component, which will be subscribed to state updates and will be passing new data from store to its children via props every time store gets changed.

Redux gives us two options for this:

I like decorators and in this case my choice is @connect option.

Thus our components are subscribed to state updates. Moving forward.

Now when we can create comments, we should learn how to properly list them. It would be trivial, if there weren’t one thing: we have server rendering. So we should deal with data fetching not only on the client, but on the server too. And this is kinda tricky.

Let’s pretend we don’t have server. How should we handle data fetching on the client? In this case we can mount component and make API call from componentDidMount() method. While data is loading, user will be seeing a loader. When it’s done — the data are shown.

But on the server, when we render with renderToString() method, componentDidMount() is out, because it’s triggered only by render() method on the client. So we need to fetch the data and put it to global store before we’ll call renderToString(). This way, when React will start rendering, store will be already filled up, so components will get the data from store via props => user will get initial html with data inside. So we need a plan how to achieve this.

The plan. In every apex component will be defined static method, which calls action creator, responsible for data loading. This method will be triggered:

One more thing to keep in mind: we shouldn’t call this method on the client after very first render — when initial data was already loaded on server and restored (dehydrated) on the client.

The realisation. Component (route handler) for every route, where data fetching is required — is apex component:

Thus these apex components will be included in initialState.components array, provided by react-router. On the server we’ll iterate this array and call static fetchData methods of apex components. To handle asynchronicity we’ll use experimental ES7 feature async/await:

To put these statics on components we’ll use one more decorator @fetchData:

Thanks to Quangbuu Le for this trick. Now we have one method, which we can use on the server and on the client to fetch the data from API.

Oops, almost forgot about this one (: To make all this stuff works, we need Redux to be initialized. In server’s initter we’re creating the store, then populating it with data, rendering head and body, serializing global state to expose it as global variable on the client, thus we can restore state from the server on the client (to avoid duplicate request to API) and finally compiling Jade template with all the stuff.

Whew! Few years ago I thought my Excel reports were tricky.

You can explore how to show and delete comments in github repo, pattern is the same.

Ok, now we have Universal Flux / Redux app, which is already pretty cool, but still un-secure and runs only on local machine. Next time we will add simple authentication mechanism, and after that we’ll deploy everything to production server.

Part I: Planning the application